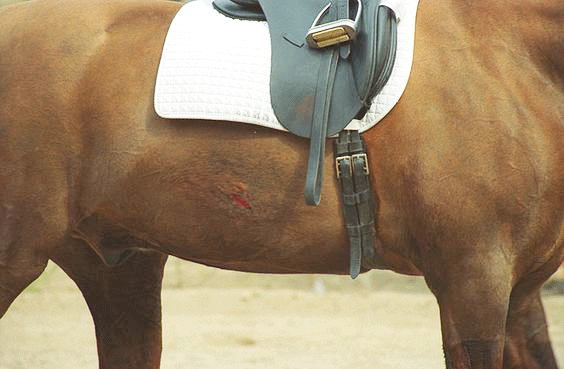 The FEI dressage blood rule states, “If the Judge at C suspects fresh blood anywhere on the Horse during the test, he will stop the Horse to check for blood. If the Horse shows fresh blood, it will be eliminated. The elimination is final. If the Judge through examination clarifies that the Horse has no fresh blood, the Horse may resume and finish its test.” ( Article 430.7.6 FEI Dressage Rules)

Three horses were eliminated due to blood in their mouth and one due to a bleeding spur mark during the European Championships in Gothenburg. The blood rule, unlike the recently proposed jumping blood rule, is strict with no room left for interpretation.

The Swiss rider, Charlotte Lenherr, aboard Darko of de Niro ZS CH, was stopped midway in her Grand Prix performance when the judge at C saw pink colored foam in the horse’s mouth. Charlotte Lenherr later stated that the horse had a scratch on his bottom lip, which made him look pink around the mouth.

The rule is clear and applied strictly, however, the situation in which a rider gets stopped midway their test and it´s proven that the horse has no fresh blood in the mouth but that the discoloration is, for example, from the horse feed or treats; this could prove to be very distracting and detrimental to both the horses and the riders performance throughout the rest of the test.

It is thus urged to keep this in mind when calling upon this rule, where waiting until after the test is recommended.

For more information and updates on the Blood Rule follow our website and check the upcoming edition of Horse International wherein we have been interviewed (View of the Expert page 42 and 43) on the implications of the proposed amendment of the Blood Rule that have recently been announced by the FEI.