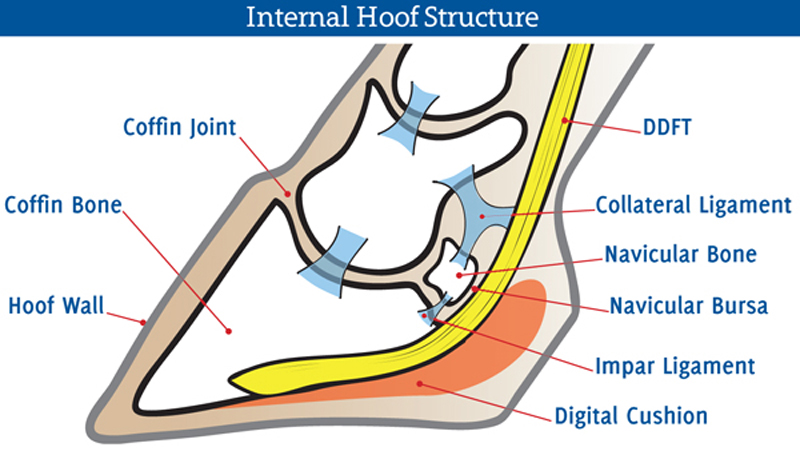 Above Hoof Illustration by Elisa Crees.

SEL represented the seller of the horse, she owned the horse for more than 20 years. Seller stated that the horse was never lame and always sound. Due to personal issues in life seller decided to sell the horse to the son of a friend of her. A full vet check was performed, advice: ‘acceptable risk’. No MRI-scan was performed. A couple of days after delivery a farrier treated the horse and attached new shoes. A few days later the horse was suddenly lame when lunged. The buyer brought the horse to the vet and because of the fact the horse did not recover within a couple of weeks a MRI-scan was performed. Outcome? Damage of the bone oedema in the coffin bone. The horse was not suitable as a dressage sport horse now and in the future.

The buyer annulled the agreement and claimed damages from the seller, the client of SEL, as well as the vet, stating that the horse did not comply with the agreement. Only a couple of weeks after the delivery the opinion of the vet was that the horse was not suitable as a dressage sport horse, while the buyer bought the horse as a sport horse.

The Court dismissed all claims and the client of SEL won the case. There was no consumer purchase and the buyer did not prove sufficiently that the horse suffered from the injury in the coffin bone at the moment of delivery. Also the claims of the buyer against the vet were dismissed: performance of a MRI-scan is not standard during a pre-purchase examination so there was no professional misconduct at the side of the vet. The problem of the buyer was that the lesion in the coffin bone could be the result of a long term progressive condition or the result of an acute injury. As there is no consumer purchase the buyer needs to convince the judge that the problem was there at the moment of delivery. When an injury could have multiple causes the risk of not being able to prove the exact cause is on the buyer.

The client was represented by Luc Schelstraete and Amanda Brouwers.